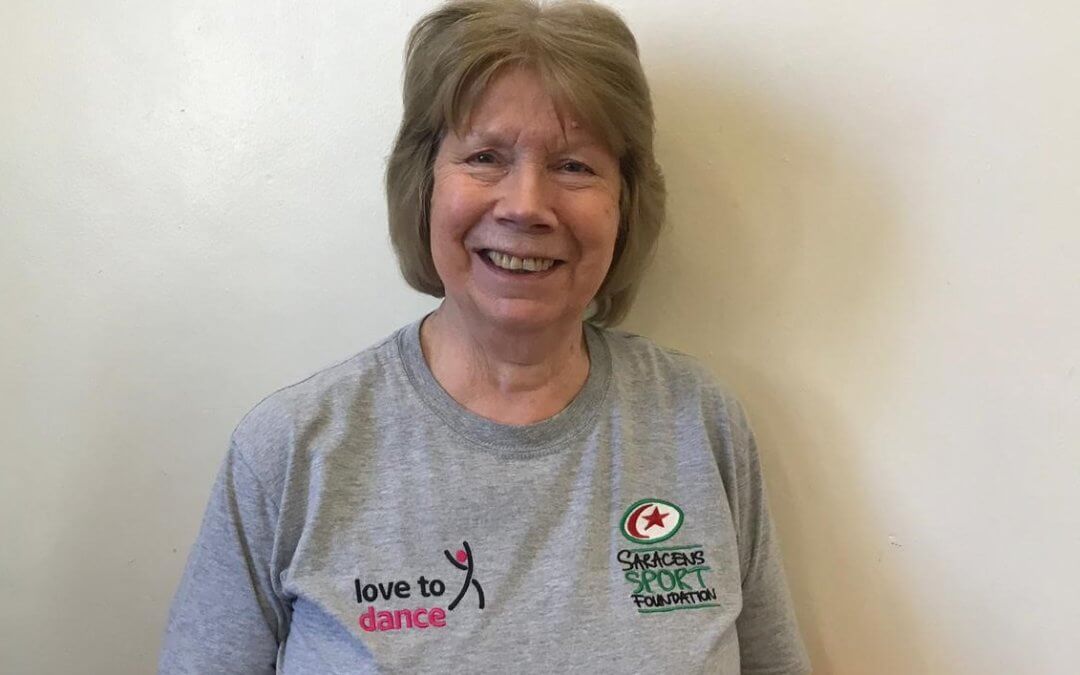 Love to Dance participant, Diane, tells us about her life, how she got involved in the programme and the impact it has had on her

I was born and bred in Cambridge. I always loved music and was in an amateur dramatic group in my local village.

I got married at 19 and had children at 21, 23 and 25. I worked part-time in hospitals and general practice as a secretary. In 1973 we moved to Scotland, where my husband was Technical Director of a scientific glass-blowing company.

I eventually started working for surgeons in the local hospital before going back to general practice as I liked having contact with patients and staff.

Throughout our 25 years in Scotland I was in musical groups performing shows including Carousel and I also always did some form of keep fit. My husband and I went to ballroom dancing classes, but he was better at jiving than ballroom!

We moved back to Cambridge in 1998 where I worked as Practice Manager of a city centre practice.

I joined a local amateur dramatic society and was in pantomime, and I also did jazzercise.

In 2013 I was 70 and my daughter decided that I should move to Welwyn Garden City to be near them in case I needed looking after!  Needless to say, I was the one doing the looking after as she started work, and I helped with collecting the girls from school, etc.

At that time the only people I spoke to regularly were my daughter’s friends, and I was finding life quite lonely as I wasn’t very familiar with the area to go out and about.

Fortunately, I met a lady who had been headmistress of my granddaughter’s school and I asked how she was coping with retirement.

She told me she’d just come from her dance class – Love to Dance – and gave me details of where and when it was held.  I joined the class in October 2016 when they were busy rehearsing for the Christmas 2016 display.

The fact that I couldn’t always keep up, or remember, the sequences didn’t seem to worry Heidi or any of the class members.

I went to the Christmas Dinner and watched all the other groups doing their displays, and of course supporting Ludwick, WGC.

Now I hate missing a class – partly because it’s hard to catch up on the routines – and partly because of the social interaction that we enjoy in the coffee break, sitting in our circle.

I enjoy the warm up and cool down exercises, but more than that it is so good to have something to focus on with the dance routines and keeping movements to music – which really keeps the memory working and is very important as you get older.

I feel that Heidi is an exceptionally talented and patient young woman, who relates well to us all.  I have a minor problem with my right arm having broken it four times when I was young.

Now arthritis has set in, which means that I can’t always get my arm up in the correct position, but I have explained that to her and she doesn’t make an example of me (or anyone for that matter).

Love to Dance has improved the quality of my life – both physically and emotionally.  Sometimes members have difficult situations in their lives, but just talking to each other lightens the load.

In addition, there are occasional visits to other social events including the ballet and amateur productions that class members may be involved in.

We also have fun – especially when deciding on costumes for our display – and I am extremely grateful to Saracens Sports Foundation for supporting us.

Want to come to Love To Dance, or know someone who might be benefit from going? Follow the link, find a class local to you and come down!